You may have heard the term exotic weed, popping up with friends, at the dispensary, or online. Exotic cannabis strains are rare finds that are extremely potent, blowing away traditional options, like Afghan Kush, Sour Diesel, and Blueberry. Keep reading to learn more about exotic weed in Los Angeles through Kushfly, a top cannabis delivery service.

There was a time when cannabis lovers could only dream about finding the mouth watering flowers gracing the cover of High Times. Now the increasing knowledge of exotic genetics makes it possible to order extreme weed in Los Angeles. Some experts disagree on what defines an exotic strain. What consumers see as exotic on the East Coast isn’t considered rare or overly potent on the West Coast. The much slower legalization timeline on the East Coast is responsible for these differences.

What can be said for sure is there are nearly 1,000 recorded cannabis strains and only a fraction are exotic. Some experts believe the strain name can help a cultivar hit exotic status. The naming process involves branding. Choosing a title that rolls off the tongue are great, but it must elicit an emotional response. For example, take Runtz. The exotic weed offers a candy-like appearance with a sweet and fruity aroma and taste. Runtz is the perfect name to grab consumer’s attention, and the appearance, fragrance, flavor, and effect handle the rest.

What are Exotic Genetics?

When discussing these potent weed strains, you may hear the term exotic genetics. This is the scientific explanation for why exotic weed is popping up more often at dispensaries from coast to coast. Breeders cross potent and rare plants to create new strains that are even stronger than their parents. You can often trace the entire lineage of exotic weed, offering a better idea of how it will affect you. There isn’t one specific genetic’s point that defines an exotic. Some of these potent strains are grown indoor and some outdoor.

You’ve heard the word potency over and over. What does this mean exactly? Delta-9 THC is the intoxicating phytocannabinoid in cannabis. The more delta 9 your buds have, the stronger the effect. Thanks to breeding programs, THC levels have increased more than 10-fold over the past 50 years. Now with exotic genetics, dispensaries can guarantee this isn’t your father or grandfather’s weed. Exotic weed strains are so potent. They can leave the most experienced cannabis customer going, “Wow, that’s a whole new level of high.” Many consumers report exotic buds put them on the moon with a psychedelic response.

Potency and notable effects are connected. The stronger the buds, the more intense the body’s response. Outside of the THC percentage, there isn’t one specific effect that defines an exotic. Every plant and person is different. Many strains in this category are uplifting. Some have an energizing effect, while others induce a complete body high that leaves them in a full couch-lock for the duration. Medically, patients often choose flowers with exotic genetics for the high THC percentage to zap away chronic pain and send stress packing. All exotics increase appetite. So whether you’re energized enough to zoom through your work or stuck on your couch, you still won’t be skipping the kitchen.

Exotic weed in Los Angeles is visually appealing. They have a full spectrum of colors, from deep blue and dark purple flowers to bright neon green. Many have a full head of light red, rusty orange, and light brown pistils, which resemble tiny hairs all over the buds. Most are covered in visible, thick layers of sticky trichomes. For example, Pinkman Goo, a rare exotic strain, develops pink and lavender flowers. Another cultivar, Trainwreck, has neon green flowers.

Aroma is another top characteristic of an exotic weed strain. Cannabis is known for its overpowering fragrance. Some flowers are strong and pungent with a woodsy scent, such as Malawi Gold, a pure sativa from the Salima region in Malawi. Another common aroma is sweet and fruity. Many of the candy-named buds get their title from their fragrance. Bubba Kush offers a fruity aroma with a coffee-like flavor. Flowers with a heavy concentration of the terpenes pinene and myrcene offer a pine and citrus combination. Fruity aromas are common. Hawaiin Snow, a popular exotic, produces a tropical aroma and citrus flavor many consumers love.

Traditionally, exotic buds were defined by availability. However, the expanding cannabis market and advances in exotic genetics and breeding are quickly eliminating this factor for identifying exotic strains. Despite these changes, staggering cannabis legalization across the U.S. will keep this determinant in play for areas new to recreational weed. But no matter what coast you’re on, once the strain starts hitting all the dispensaries, its exotic status goes away.

The number of stains with exotic genetics fluctuates. When the potent flowers start showing up in dispensaries up and down the coast, the exotic designation can start to fade. Here are some of the top exotics now available through Kushfly. Get them while you can!

Exotic weed comes in all shapes, sizes, colors, flavors, and aromas. But they all share a high-THC level. Bubba Kush doesn’t disappoint. This exotic weed in Los Angeles contains up to 22% THC. The true indica strain is an older flower with a rich history going back to the early 1990s. As for the parentage of Bubba Kush, that remains a mystery.

The 100% indica flowers are big, bulky, and have an array of green hues with some pale purple and bright, rust-colored pistils. The kush genetics produces a sweet hashish taste and fragrance with chocolate and coffee undertones.

Keep Bubba Kush in your nightstand for before-bed use. True to its indica roots, a few too many puffs of the exotic strain will knock users out. It provides a head-to-toe body high that calms the mind and pushes away stress, and boosts mood. Medical users enjoy Bubba Kush for sleep issues, stress relief, and chronic pain.

Although it sounds cold, this exotic weed strain will warm you up with 22% THC. The 50/50 hybrid makes the exotic list for its striking appearance. Snowcap is covered in a thick layer of white, sparkling trichomes. The lineage is a bit disputed, with some authorities noting it’s a crossbreed of Snow White and Haze and others claiming it’s a blend between a female Snow White, a mix of Cat Piss and Jack Herer, and a Cat Piss male grown from seed.

Snowcap buds have such a heavy coating of trichomes it’s easy to miss the fluffy light green leaves and the bushiest rust-colored pistils ever seen. It produces a citrusy fragrance and flavor with menthol undertones.

After the outstanding appearance, the next big seller for Snow Cap is the body’s response. The high THC content leaves consumers feeling happy and full of giggles. Many users report a boost in creativity and an energizing effect with the Snowcap strain.

Although it’s not vanilla, Ice Cream Cake is heavily frosted with a glaze of white trichomes. The flowers are light green with specks of dark green throughout and nearly translucent orange pistils. The fragrance and flavor are clear giveaways for the strain’s name, vanilla with spicy undertones. Some users report other aromas, including hints of sweet fruit and fresh lavender.

The scrumptious cannabis flowers offer a thoroughly uplifting experience that relaxes the mind and provides a head-to-toe body high. Stick to evenings with Ice Cream Cake. The creeper induces a complete couch-lock. Medical users enjoy the exotic weed in Los Angeles for chronic pain and sleep issues. A few puffs before bed have the potential to put consumers out fast and for the night’s duration.

The parent of Ice Cream Cake is a celebrity herself. This popular strain is a cross between Triangle Kush and Animal Mints. Newbies to exotics should go slow with Wedding Cake. The indica-dominant flower packs a punch with an average of 25% THC.

Wedding Cake has an award-winning appearance with light, medium, and dark greens. Some phenotypes feature pink and purple colorings. The potent flower has a layer of bright orange pistils and a coating of white, sparkling crystalline trichomes. Her lineage explains why some Ice Cream Cake users notice a sweet and fruity aftertaste. Triangle Kush is myrcene-dominant, and Wedding Cake has a high Limonene percentage. Its main fragrance and flavor is sweet vanilla. The unique terpene profile pushes the slightly fruity undertones.

Consumers report Wedding Cake provides an uplifting high that’s more calming than energizing. The potent exotic weed relaxes the mind and body. Medical users choose it for chronic pain and sleep issues. The munchie effect is real with Wedding Cake. Patients with nausea and appetite issues will find the flowers hit the sweet spot every time.

Apple Fritter is a true exotic weed strain. The 50/50 hybrid is one of the most potent plants available in Los Angeles, with nearly 30% Apple Fritter has excellent parentage. It’s a cross between Sour Apple and the much-loved strain, Animal Cookies. In 2016, the exotic genetics of the Apple Fritter took the top prize from High Times as one of the World’s Strongest Strain.

Not only is Apple Fritter potent, but it’s a beautiful olive-green flower with deep purple undertones, bright orange pistils, and a thick layer of gooey white trichomes. As the name suggests, she has a sweet apple flavor and an aroma reminiscent of a fresh-baked apple fritter. Some consumers note it has a vanilla aftertaste.

It goes without saying new and experienced users should take it slow with Apple Fritter. The super-potent flowers offer an immediate uplifting experience that zaps away stress and completely relaxes the mind and body. Keep Apple Fritter for nighttime use. If you take a few puffs of the flower during the day, it will be difficult to accomplish anything. Medical consumers find it’s ideal for chronic pain, stress, depression, and insomnia.

Gushers cannabis strain is another candy-like exotic weed strain growing in popularity for its fruity fragrance and taste. The indica-dominant flowers contain between 15% and 22% THC and have an exciting family line. Gushers is a cross between Gelato #41 and Triangle Kush.

The Cookies Fam Genetics breeder from the Bay area developed a beautiful flower with Gushers. It has intense dark-green and light purple hues with thin, bright orange pistils and a thick, sparkling layer of sticky trichomes. As the name suggests, Gushers has an overpowering fruity aroma with a blend of berry, grape, and tropical flavors. Some consumers note a sour aftertaste.

The Gushers exotic strain produces a head-to-toe body high that leaves consumers tingly and wholly relaxed. Keep the indica-dominant flowers for nighttime use. The high THC levels are perfect for erasing stress and anxiety at the end of a long day. But like all indica strains, the couch-lock effect is real and will prevent users from accomplishing anything other than eating, channel-surfing, and napping.

Are you ready to try some of these scrumptious exotic weed strains? From Wedding Cake to Gushers, Kushfly sells and delivers these rare finds right to your door. Buy exotic weed in Los Angeles and experience top-shelf flowers that make buds with traditional THC levels feel like candy. 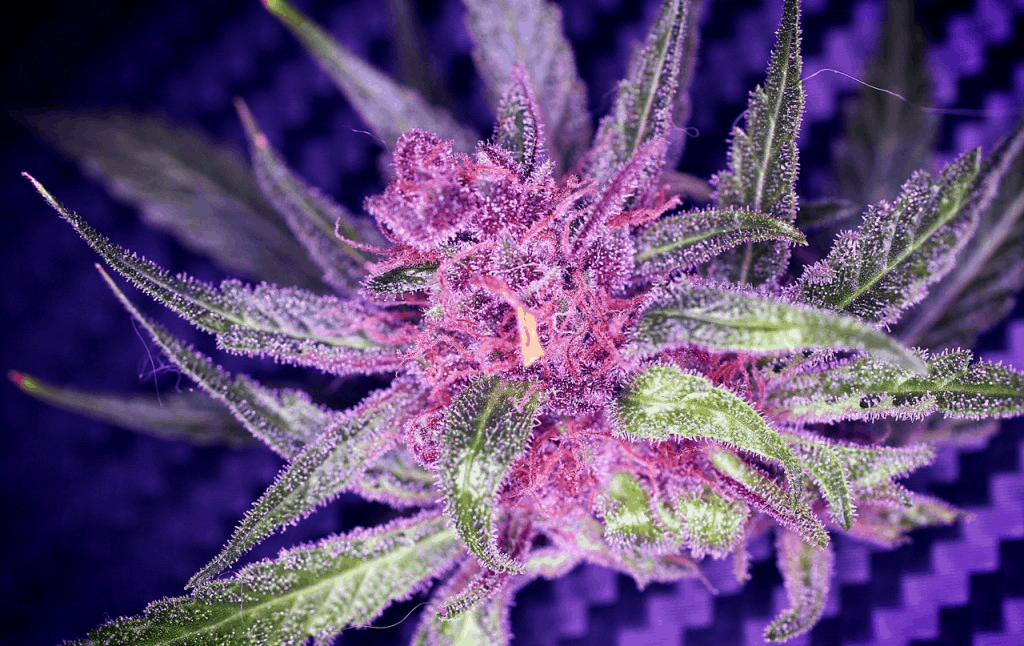