Andrew Kirschner’s kitchen is where carrots would want to be if they could be anything. They’re roasted to almost scorched at Tar & Roses, soft and sweet and caramelized, and topped with a dollop of creamy “crème fraiche” with chermoula. The “pho” paccio on the menu, like the carrots, has a lot of flavors. Think of it like pho without the broth: paper-thin beef rounds topped with sambal, Thai basil, cilantro, and red jalapeño. We enjoy sitting at the bar in the chilly, but not overly so, restaurant. A lovely terrace with a retractable roof is also available. When you visit Shojin, you’ll notice that each meal is prepared using only the finest ingredients. This restaurant places a premium on healthy eating, with no meat, fish, or dairy products on the organic restaurant menu in any form. When you visit Shojin, you won’t discover any artificial additives, white or brown sugar, or salt. Everything on the menu is also vegan, gluten-free, macrobiotic, organic, and natural. So it does not only serve organic food, it is also one of the best vegan restaurants in Los Angeles. This place would be a great choice to surprise your significant other for a date. At this delicious eatery, Kale is the star. Along with banana, cashew, and agave, it’s the main ingredient of the beloved “sweet kale smoothie.” It’s a popular drink alongside vegetarian pizzas and burgers, which are all served uncooked. The pizzas, for example, can be made with whole wheat flatbread or raw “SunCrust,” a nut-and-seed mixture. However, kale isn’t found in every dish. Lettuce tacos, which are classified as an appetizer, serve as a filling lunch. Faux chorizo is piled over four chilled, crunchy Romaine ‘tacos’ presented pretty on a dish.

Eat locally in LA at the appropriately called Locali if you want to experience excellent deli fare. Locali wants to make guests smile and think about what they’re eating with cuisine that appeals to both vegans and omnivores in equal proportion. Locali only serves dishes made with responsibly sourced products, which keeps many repeat customers returning back for more. Aware of the competition in the Los Angeles area, Locali attempts to only serve food that is “worthy” of its customers’ patronage and designed to satisfy both the restaurant’s collective and individual appetites. 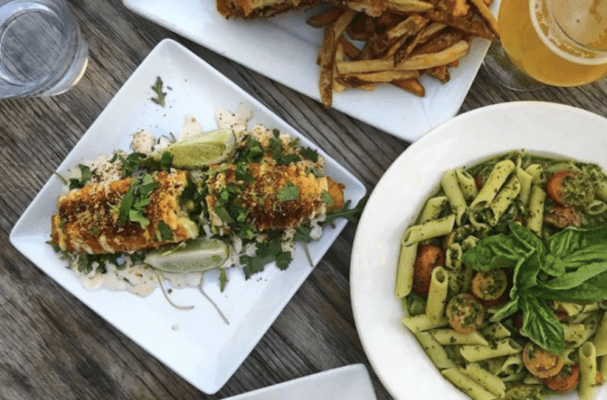 You immediately feel better as you step into this super chill café. Perhaps it’s the tiered basket of nubby beets, ginger, and apples on the counter, or the tall glasses of green liquid being sipped by many of the customers. The “bowl of soul,” a mix of quinoa and black beans with roasted sweet potato, sautéed kale, and a gluten-free mac & cheese ball, is one of the most popular dishes. Keep a lookout for the barbecue tofu steak special, which is garnished with crunchy corn tortilla threads. For dessert, there’s organic, vegan Kind Kreme ice cream in flavors like coconut tamarind or honey vanilla, for those who prefer more classic flavors. Sage also offers a children’s menu. Save your THC edible for later, because this place serves food so delicious that makes you high on flavors. This teeny-tiny dinner-only establishment makes vegetarians proud. The cuisine is hearty and filling. Take the crisp, golden, fresh-from-the-oven savory tart and fill it with your favorite fillings: roasted tomatoes, caramelized onions, and sheep feta, or crimini mushrooms and braised leeks. It comes with a delicious green salad dressed in a zesty vinaigrette. Several recipes, including a Moroccan vegetable tagine on quinoa, pay homage to the Middle East. Elf Café is great for a date because of its bohemian chic decor, dark lighting, and sultry music. It’s grown even better with the approval of a long-awaited liquor license (beer and wine only).

Don’t let the name fool you, because Le Pain Quotidien literally translates to “daily bread,”, so it’s only natural that this institution provides delectable homemade bread. In addition to bread, Le Pain Quotidien offers organic coffee, pastries, soups, salads, and tartines throughout the day. There’s always a seat for you at one of this eatery’s communal tables, whether you want breakfast, lunch, supper, or dessert. You won’t want to leave once you walk through the doors of Le Pain Quotidien, with music playing in the background, the scent of freshly made bread, and the company of your fellow diners.

Mohawk Bend isn’t what you’d expect to find in an ecological restaurant. It’s a theatrical space, housed in a classic vaudeville theater. The restaurant’s most distinctive feature, though, is its beer. There are 70 beers on tap, two more in casks, and beer memorabilia strewn over the place. One sign reads, “Put a Little Weekend in Your Week.” Let’s raise a glass to that, perhaps with some pizza. For their pies, the kitchen employs organic wheat and organic tomatoes. They’re delicious and chewy when they come out of the oven, with a blistered crust. The classic Holy Trinity pizza comes with an option of regular mozzarella or vegan cheese, as well as a vegan banh mi pizza with Sriracha aioli.

If you are in Los Angeles and seeking to order flowers or edibles to your address, check out our flowers and edibles pages. Make sure to stop by at the deals page as well to get the best out of your purchase.