Cannabis songs have been a mainstay of popular music for decades, from Bob Marley’s “Kaya” to Young Thug’s “Stoner.” Artists like Snoop Dogg, Wiz Khalifa, and Willie Nelson have devoted their entire lives to allying with the magical plant, creating some of the best music ever.

The majority of the world’s countries still forbid the use of marijuana, but music has always been a haven for stoners. Reggae, rock, jazz, and rap all include songs about marijuana as a frequent theme. The therapeutic properties of one plant have brought together countless celebrities and followers throughout history. To help with any high, we’ve put up a selection of our best songs about weed.

These cannabis lovers were open about their love of the herb before they became the Heckle and Jeckle of rap, which made their first featured collaboration, “How High,” a perfect fit. Stoner Jeff Spicoli would make love to this tune, which was produced by fisherman hat-wearing EPMD weirdo Erick Sermon and sampled the zooted disco track “Fly Robin Fly” by Silver Convention. The duo’s 2001 movie of the same name featured the song as its opening theme. They also produced a remix and a part two of this song, although neither of them matches the original’s funk.

The Label Death Row was run by super-producer Dr. Dre, whose burgeoning G-Funk became a global soundtrack because of its sonic fusion of vintage soul and modern swagger. G-Funk was described as fluidly weaving together a swarm of background singers and rappers, weird samples, and his characteristic horror-flick keyboard lines” by critic David Browne. Snoop’s witty and gritty vocals were the lyrical element that made the globe shout, “Rollin’ down the street smokin’ indo, sippin’ on gin and juice,” but the music was only one side of the funk.

Kid Cudi’s break with conventional pop music came when he flipped the title of a Cole Porter hit. Cudi sounds like Portishead sans the accent in this song, which was inspired by the Geto Boys’ iconic “Mind Playing Tricks on Me.” One of the finest chill-out tracks since trip-hop flew into the United States on a Concorde was created by the Cudi in collaboration with longtime musical colleague Dot da Genius. “Day ‘n’ Nite” is a moody, psychedelic, dreamy piece of music that will make you feel less alone if you’re a stoner.

Salaam Remi provided the song’s flawless Phil Spector girl group sound, and Amy Winehouse addressed all the people in our life who consumed all of our tequila without bringing any friends to the table. “Tell your boyfriend next time he around to buy his own weed and don’t wear my shit down.”

To see how much fun these guys were having while under the influence of drugs, one only needs to look at Ricky Powell’s images in the Beasties chapter of the fantastically dope Def Jam Recordings book. The song’s music video simply supports what Powell’s photographs had already shown: traveling is a waste of time! Sampling Robert Pryor.

Afroman – Because I Got High (Official Music Video)

“Because I Got High” was one of the few songs that Howard Stern, the shock-show presenter, regularly played back in 2001. The chill song, which features pot superstars Jay and Silent Bob, was called “easy, breezy, catchy as a cold hit that appeals to every demographic” by non-weed smoker Dave Bry. Afroman was a one-hit wonder who might have succeeded Jay-Z had it not been for the fact that, well, you know.

The song “Purple Swag” became famous right away. In the summer of 2011, a braided rapper introduced Texas to the Harlem streets, and the world witnessed the first instance of a problematic white female with gold grills mouthing the phrase “This is for my niggas getting high on the regular.” The New York collective that created the song, which is a chopped and screwed anthem, did so when Tumblr was still in use. “Purple Swag” evolved into more than just a song about “purple drink” and “purple cannabis,” serving as a declaration that true swag was independent of geographical boundaries.

Now that you have the song list, let’s move on to another list that we will do strain reviews to pick the flowers as well as other good stuff for pairing with these songs. Here are some of the best strains you can order in Los Angeles. 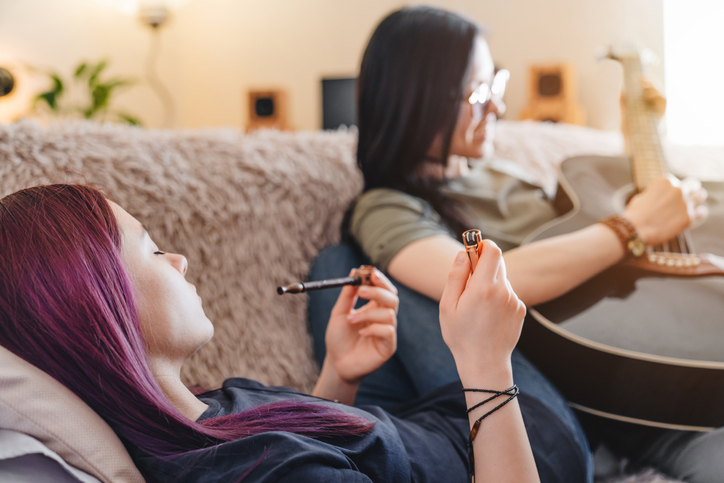